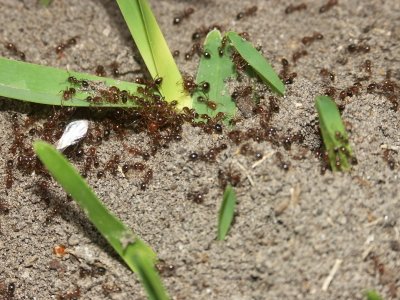 Ants are nuisance pests and interrupt everything from picnics at the lake to family meals in the kitchen. They’re always on the search for food and new places to expand their colonies. Even if you put down baits or spray with an over-the-counter product, they find ways to come back and to continue invading your home and property.

Boiling water will indeed kill ants. It doesn’t, however, kill them all. If you pour boiling water on an ant colony, it will kill the ants on the top layer. The water can only damage the ant colony while it’s boiling. It will cool eventually and put the ants in repair mode. You’ll still have the original ant colony to deal with, including new colonies that pop up after you’ve sent the ants running for cover.

Vinegar and cinnamon keep ants away

Ants dislike the smell of cinnamon, but it won’t kill them or deter them from coming into your home. Some people use vinegar to treat ants, but when it doesn’t work, they wonder what they’re doing wrong. Vinegar disrupts an ant’s pheromone trails, causing confusion and making it hard for the ant to find a way back to its colony. However, vinegar won’t stop other ants from finding a way to your home.

Mixing ant populations will kill them all

Ants are aggressive when it comes to defending their colonies. They’ll attack most any bug or insect that invades their space, including other ant species. It’s a myth that introducing a different ant species to a colony will make them fight to the death. Though some ants might die in the process, they will all stop fighting after a while and head their separate ways.

The internet makes it easy to do a quick search for do-it-yourself ant control. Unfortunately, homemade remedies almost always fall short. They might cover up the problem for a little while, but the ants will come back and take over your property again. Flexible Pest Services uses the most effective techniques and treatments to deal with numerous ant species. We’ll eliminate ant colonies in your home and set up a preventative maintenance plan to keep them from coming back.